Editorial note: This chapter on the olivocochlear efferents has been written preliminary inEnglish, in order to ask professor John Guinan Jr. (Harvard Medical School, Boston Massachusetts) his opinion on the chapter text and on the permissions in relation to the use of the illustrations. The chapter is available both in English and Dutch now. In this English version the texts within the illustrations are given in Dutch. The editors think that this, in combination with the ‘surrounding’ text, will be no problem.

The Editorial Board of the Textbook greatly appreciates that  professor John Guinan Jr. (Harvard Medical School, Boston Massachusetts) has commented this chapter and has given valuable advices on the use of the illustrations.

Most information on the olivocochlear efferents described in this chapter has been obtained from the paper ‘Olivocochlear Efferents: Anatomy, Physiology, Function, and the Measurement of Efferent Effects in Humans’ by Guinan J.J. and from the textbook ‘An Introduction to the Physiology of Hearing’ (2008) by James O. Pickles.

The auditory pathway is a huge and complex system of bundles of neurons, which send information from the cochlea to higher auditory nuclei. These are called ‘afferent’ bundles, consisting of ‘afferent’ neurons. The afferent neurons are connected with the bases of the inner hair cells via about 30.000 ganglion cells. In the auditory nerve the number of (afferent) neurons is much bigger than the number of hair cells, because between 10 and 20 neurons have connection with one single inner hair cell. These neurons are called radial ‘type I’ and form the majority of neurons in the auditory nerve. Additional information about afferent innervation can be found in Ch. 3.3.1, Par.3 of this Textbook.

Besides of the afferent neural system there is an ‘efferent’ neural network in which information from higher auditory nuclei is sent down to more peripheral centers and finally to the cochlea. Whereas the functions of the efferent pathways from colliculus inferior and from cortex are unclear and unknown for a great deal, the anatomy and properties of the olivocochlear efferents, that connect the olivary complexes to the inner and outer hair cells, are well understood now. These efferents, called the olivocochlear acoustic reflex bundles, regulate the cochlear gain and frequency selectivity of the outer hair cells under acoustic stimulation.

The present chapter presents some striking examples of the reflexes (feedbacks) generated via the olivocochlear acoustic reflex bundles. Although this evidence is based on animal experiments, the scientific experience at this moment is enough far developed for extending the findings reliably to humans. Moreover several psychophysical experiments with efferent stimulation have been carried out already for humans (see e.g. Brashears et al., 2003). The topics here to be discussed aim to present a combined insight into the generation of the reflexes on the basis of the anatomic connections and into the way they influence the gain and frequency selectivity of the outer hair cells

These topics have been selected too because they are a further step in understanding auditory mechanisms like the detection of signals in noise and the protection of hearing against damaging high sound levels. This choice is in line with the aims of the Dutch Textbook of Audiology.

Subjects to be discussed:

The best known efferent pathways to the cochlea’s are the ‘olivocochlear reflex bundles’ (OCB), consisting of the medial olivocochlear (MOC) bundles (left and right) and the ‘lateral olivocochleaire (LOC) bundles (left and right). The medial bundles are connected with the outer hair cells (OHC) and the lateral ones with auditory-nerve fibers under the inner hair cells (IHC), as illustrated schematically in Fig.1. This is schematized from a transverse section of the brainstem and the right cochlea of the cat.

A third subdivision is in that in thin unmyealinated neurons and thick myelinated fibers. Note that in Fig.1 the thickness of the lines corresponds to the number of fibers in the bundles, not to the thickness of each fiber or the fiber’s myelination. 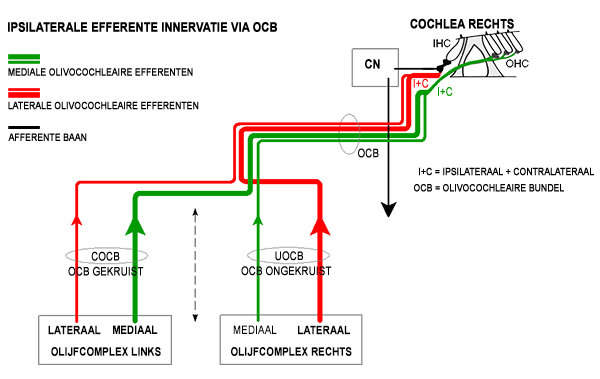 Fig.1. Schematical representation of the courses of the olivocochlear acoustic reflex bundles (OCB) to the right ear. De medial bundles haven been drawn in green and the lateral ones in red. The abbreviation COCB refers to crossed bundles and the abbreviation UOCB represents uncrossed bundles. The afferent bundle ascending from the inner hair cells to the (ventral) Cochlear Nucleus (CN), and farther on (see Fig.2) is indicated in black. The drawing is a transverse section of the brainstem.

The best investigated reflex is the contralateral MOC reflex (Fig.2). Sound presented to the right cochlea (at the right in this figure) causes excitation of afferente neurons from the inner hair cells (indicated in black). These afferents innervate reflex interneurons in the posteroventral part of the ipsilateral cochleaire nucleus (CN). These in turn innervate MOC neurons in the contralateral olivary complex which cross again (back) the brainstem and innervate the ipsilateral outer hair cells. Thus the ipsilateral reflex bundle crosses the brainstem twice. 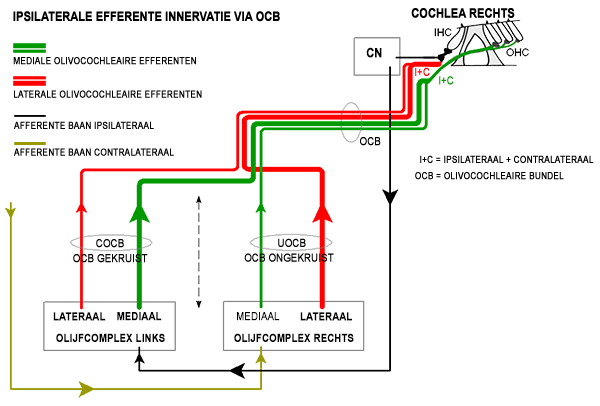 Fig.2. Schematical representation of the generation of the ipsilateral reflex in the rightear via the crossed olivocochleaire (OCCB – MOC) bundle (green and thick).

The contralateral reflexes in Fig.2 are evoked by stimulation of the left ear. In this case the afferent neurons run via the left cochlear nucleus to the (medial) MOC neurons in the ipsilateral (right) olivary nucleus (the dashed black line). From there the efferent neurons follow the thin green line at the right hand side in Fig.2, ending on the ipsilateral outer hair cells.

From a comparison of the thicknesses of the lines indicated in Fig.1 and Fig.2, which correspond approximately to the number of fibers involved, one might conclude that the ipsilateral reflexes are stronger than the contralateral ones. This conclusion is only applicable to animals, especially for the higher (basal) frequency regions. For humans so far no indications for such differences have been found. A possible reason for this might be the fact that the maximum sensitivity for sound is in a lower frequency region in humans than for the experimental animals investigated.

Direct contact of the MOC neurons with the outer hair cells occurs via the ‘Outer Spiral Bundle’ – OSB – Hfdst.3.2.2, Par.5). Also contacting outer hair cells are ‘type II’ afferent neurons. The dendrites of these afferents run into basal direction and thereby contact several outer hair cells. The efferente synapses are situated close to those of the afferente dendrites (see Fig.8 in Ch.3.3.1).