Both IEC and ANSI define time constant as the time it takes the output level to reach a certain distance from the final steady state level. This type of definition is ambiguous because the value of time constant is not only influenced by the speed of the peak detector (the RC constant), but also by the amount of overshoot. This implies that the behavior of two systems with the same IEC/ANSI time constant can be very different (Kates, 1993). For instance, one system with a low threshold and fast compression, and another system with a high threshold and slow compression, might have the same release time constant when measured over the entire input range. Of course, this is remedied by IEC and ANSI through the specification of fixed input levels for time constant measurements.

In contrast to IEC and ANSI, we define time constant mathematically as the time it takes for the output level to reach 1/e (± 37%) of the ultimate change in gain. Fig. 1 illustrates the difference between our and the IEC definition. From the figure it can be seen that the definitions are fundamentally different. Both the IEC and ANSI definitions are based on the tail of the response, while our definition is based on the initial part. Consequently, the ratio of time constants according to the IEC/ANSI definition and ours is not constant, but depends on the amount of overshoot (and therefore on the combination of input signal, compression ratio and threshold). 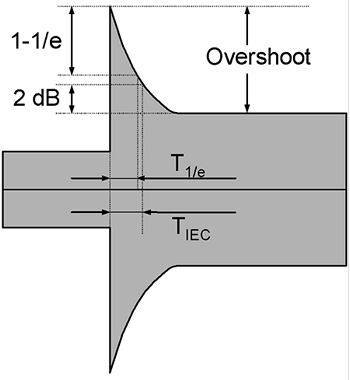 A change in input from 55 to 80 dB with CR=2 results in an overshoot of the output level of 12.5 dB. Using this overshoot and assuming logarithmic decay for an IEC system, the ratio between our (Texp) and the IEC definition (TIEC) is Texp/TIEC = 0.4 for both attack and release time. For an ANSI (1996) system the ratio for the same input rise is Texp/TANSI = 0.5 for attack time and Texp/TANSI = 0.6 for release time. Since these ratios depend on overshoot, they differ for different input signals and compression ratios.